Have been wondering when these were brought about and by who? Was it Gardner Fox with Jay Garrick? Broome and Infantino with Barry in the Silver Age? If it was in the Silver Age was it just to promote education in comics or was it to distance the comic from other comics that were being blamed for causing juvenile delinquency? Both? (Therefore was it a push by Julius Schwartz?).

So, normally I like to have a lot more reference material to work with when answering these types of questions, but the internet has let me down! It seems that nobody has really cared much about the history of ‘Flash Facts’ before – certainly not enough to fight the copious blogs and news stories that use it for headlines and make the search much harder.

I can’t tell you which writer/artist was the first to use them, but as we’ll see they’re actually part of a wider tradition in comics and DC in particular. As /u/deadpa noted below, this quote from Julius Schwartz, legendary editor of DC throughout the Silver Age, from Flash #124 (1961) sums up his attitude well:

“Many of our readers have complimented us for our realistic approach to The Flash. When we present an amazing, almost unbelievable idea or gimmick, we like to explain it scientifically.”

That said, they certainly predate the Silver Age, although thanks to people like Julie that’s where Flash Facts as we most often think of them originated. We’ll start this story with the Golden Age Flash, Jay Garrick. Of all the places to find to back me up on this, there’s this from TV Tropes on the character:

Breaking the Fourth Wall: Jay would occasionally shill his own book to readers, both in his own comics and in All-Star. He also had the occasional speed records page in which he related then-current speed records and other facts to the reader. In a way, these were the original “Flash facts”.

Anyway, it wasn’t just the Flash though, it was a reasonably common thing both in the Golden and the Silver Age for comics to be full of a lot of stuff like this, that combined trivia, science and general information. As this blog put it, when referencing this image:

For a long time, every DC comic had something like this, a little half- or full-page filler like “Flash Facts” or “Metal Facts and Fancies”, possibly so that they could claim some portion of their content was educational. Of them all, I prefer “Science Says You’re Wrong if You Believe That…” because it’s the only one that flat-out insults the reader. These things are terrific insights into what the heck people were caring about at the time that they were written, or at least what comics writers were caring about. For example, read enough stuff from the 60s and you’ll see that bit about deadly gasses from the tail of a comet coming up again and again, though nowadays it’s gone the way of the classic plot to kill someone with a weak heart by scaring them to death. So were people obsessed with comets or was it just a case of writers getting as much use as they could out of a stlye of disaster with a lot of dramatic appeal?

I included the whole paragraph as I too find this stuff kind of interesting, but maybe that’s because I work in marketing/advertising and communications, so your mileage may vary :)

Anyway, it wasn’t just science facts they were sharing. There was also:

Anyway, the reason I’m mentioning all those is that these kind of full page or featured, informative inserts were also the way that Flash Facts were often integrated into the story. Check out these two early examples:

These read like the old Ripley’s Believe it or Not! comics in many ways, but as we know they were eventually more closely incorporated into the story of the comics. The leap between these types of examples and the, more often than not, third person narration of comics was a relatively easy one to make as the narrator – often spelling out exactly what the reader was seeing – was omnipotent and so could easily opine on science facts to explain how the Flash did all the thing she could.

This, with the rise of first person narration and better printing techniques that required less hand holding, eventually saw the facts transfer over to actually being said by Barry, and later, Wally. I can’t check right now, but I think it was during Morrison’s run on The Flash, specifically The Human Race arc, where Wally actually directly mentions how Barry’s science background meant he often referred to things as ‘Flash Facts’ while trying to explain things to/train Wally. 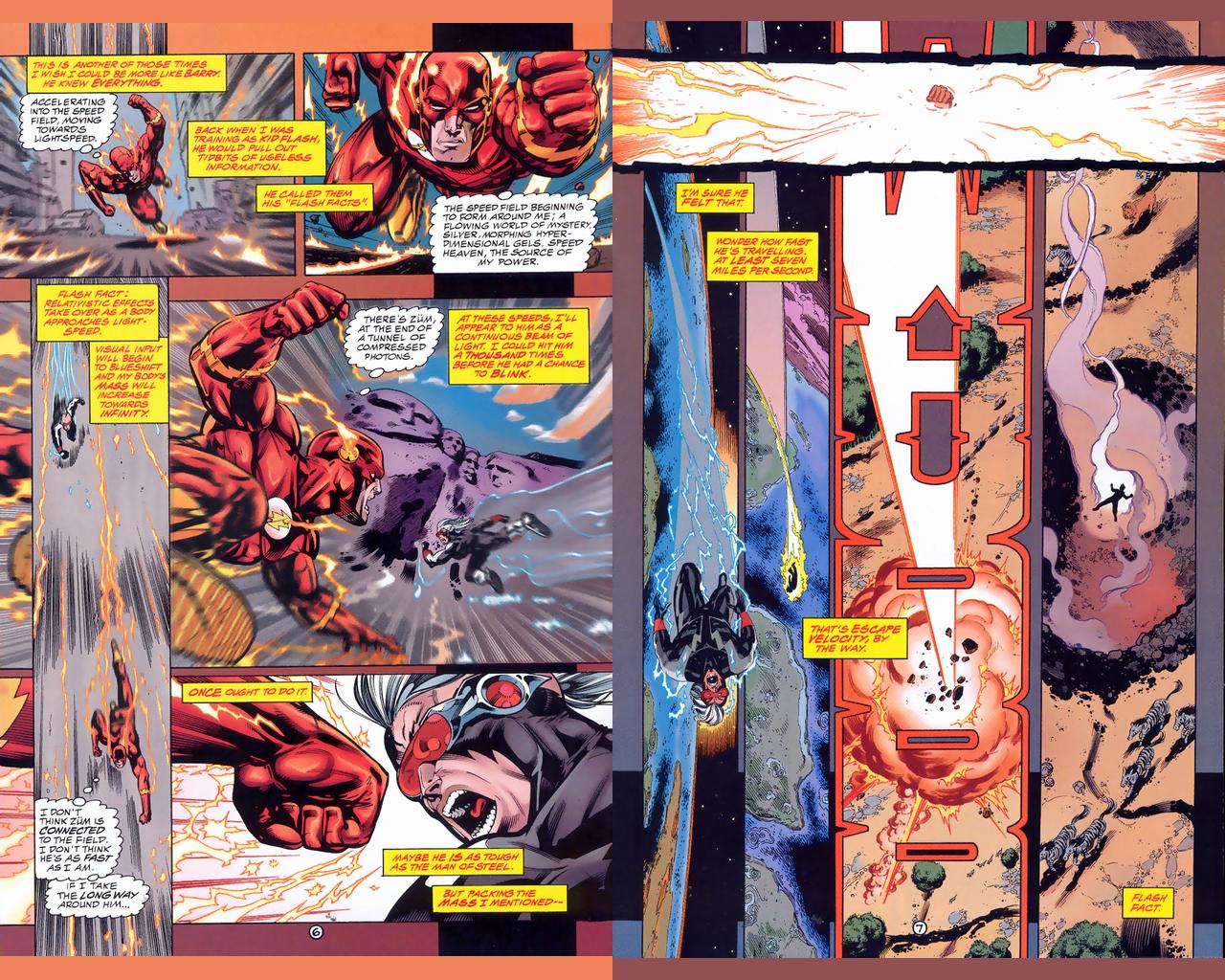 I really thought I’d find a blog/article charting these through the decades, and this is more conjecture than I normally like, so anyone should feel free to call me on it – hopefully with evidence though :)

I’ll leave you with two treats for sitting through my rambling:

Anyway, hope this was helpful – sorry I couldn’t be more concrete or informative!

One thought on “What is the origin of Flash Facts?”